The Rome of my mother

When my mother turned 16, she was in Rome. Totally awesome, right?

She was visiting a long-time friend whose family had moved to Germany — her friend’s dad was in the military. So she went on vacation with her friend to Rothenburg ob der Tauber in Germany and camping in the Netherlands in the family’s VW bus. Again, totally awesome.

A friend of my mom’s friend just happened to know someone who lived in a villa outside of Rome, so they went there as well. They took the night train, saw the sights and from the scrapbook, I know they had a wonderful time.

Except my mom did not throw any coins into the Trevi Fountain. She was too cheap, she said. I knew I had to right this. I wanted to see all the sights she saw and more, but I knew that if I did only one thing in Rome, it was going to be throwing a coin for her into that fountain. 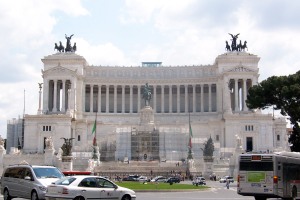 The first sight I saw in Rome was from my mother’s list: the Victor Emmanuel Monument. It was built to celebrate the 50th anniversary of Italy’s 1870 unification, and Victor Emmanuel was the king.

On my first full day in Rome, I saw much more from my list, starting with the Colossuem, a 2,000-year-old example of the

architectural prowess of the Romans. It is four stories tall with the three types of Greek columns on either side of the Roman arches. The Colosseum was used for fighting and killing, which were spectator sports to the Romans, and the most famous sport was gladiator battles. The Colosseum’s floor is missing, exposing its underground passages, where the beasts the gladiators and the unlucky prisoners fought were kept. Sometime this summer, the underground will be open to the public. You can read about it here: Colosseum underground to open. 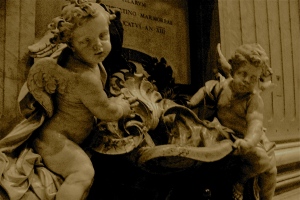 were stops on my mother’s list, but I only was able to visit St. Peter’s. The church was so much more than I expected. I knew it was big, but big is an understatement. I mean, these cherubs are bigger

than me. Cherubs are supposed to be small, but when there are cherubs in a church of this scale, over-sized cherubs are necessary. And the church was just plain heavenly. Hearing the service from the base of the dome was beautiful, and again, the size is incredible.

Later that night I had dinner at a restaurant at Piazza Navona and my waiter volunteered to take a video of me throwing my coins into the Trevi Fountain. Approaching the fountain in the dark without hoards of people allowed the fountain to speak for itself. And it did.

Before I could see it, I could hear it sounding like

a fast-moving waterfall. And really, that’s what it is. The water sparkled and the statues were lit from below. I could have sat there all night, just listening and watching the tourists throw in their coins to guarantee a return to Rome.

I began the following day at Piazza del Popolo,

where my mom climbed one of the lion statues. Later in the day I saw the Temple

of Aesculapius at the Laghetto, the lake in the Villa Borghese Gardens.

At the end of that day, I was refreshed but sad. I had accomplished what I set out to do, but I was leaving the next morning. But what do I have to worry about? I will be back. I threw a coin into the Trevi Fountain to guarantee my return.

This entry was posted in Europe, Tradition, Travel Narrative and tagged Customs, Rome. Bookmark the permalink.