There were many things I wanted out of my trip to Salzburg and Rome, but what I wanted the most was a dirndl. A dirndl is the traditional female dress of Bavaria in southern Germany and Austria. It is composed of a dress, blouse and apron. There are many different styles because each village has its own traditions. To see some of these styles, check out my Salzburger Dult photos.

After compiling a list of, oh, 21 dirndl shops in Salzburg and another five in Rosenheim in Germany, my friend Laura and I were ready to embark on our grand tour of dirndls.

Early Tuesday morning, before starting my journey to Rome, we

met at Cafe Tomaselli for coffee and then headed to the Getreidegasse, a quaint street of even quainter shops in Salzburg’s Altstadt, and the location of many dirndl and Trachtenmode (traditional dress) shops.

We had already crossed two stores off the list the night before, because the dirndls in their windows cost upwards of €1,000, and I was hoping for something a bit more affordable.

Some stores on the Getreidegasse were possibilities and others were complete misses. A couple were having sales or had a special sale section

of the store. Then, at the end of the street, we turned left to go to the Herbert von Karajan Bushaltestelle, and there was Moser, with a beautiful, blue and red dirndl in the window for under €100.

Unfortunately, the store wasn’t yet open because it was only 9 a.m. Three busy days later I return to the store immediately after disembarking the train from Vienna on my return from Rome.

Laura and I were perusing the dirndls and I kept returning to this bright pink dirndl with a jumping-deer print; buffed, silver buttons; and a shiny, forest green Festtag (festive day, like a holiday, Sunday or the day of a party) apron.

I tried it on, thinking it was a bit too tight, but both Laura and the clerk helping us said it is supposed to be tight and not really comfortable. And then, to my surprise, after the clerk rearranged the shoulder straps, she started to rearrange my blouse by pulling it down and more or less saying that I wasn’t showing off enough.

It did not bother me that she did this because I did not know how to wear a dirndl, but the forwardness of the clerk, unless I missed her ask if she could straighten me out because she was saying a lot of things I did not understand, was what shocked me. What I mean is, is that Austria is a country of formalities and rules for everything from wear to tie the apron on your dirndl (back for a widow, left for unmarried and right for married) to how to hold your silverware and how to toast with different styles of beer glasses. It also did not bother me because I was basking in the glory of finding my dirndl.

What I liked best about this whole experience was that I tried on only one dirndl. I was ready to try dresses on at over 20 shops and go to Germany if necessary until I found the right one, but I knew the pink one with jumping deer was right and I did not want to consider any others. Really, I couldn’t have asked for anything better. 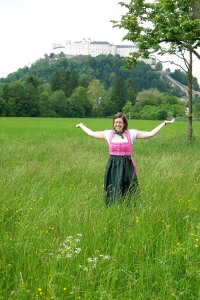