Dublin, Ireland, was not the city of my dreams. It wasn’t even close.

I had heard good things about it, and with an easy RyanAir flight from Salzburg, I decided I would squeeze Dublin in between London and Athens on my February 2009 break. This did not work out so well.

The weather was terrible. The sky in each of my Dublin pictures is foreboding of the nightmare to come. It started as rain and turned into snow, shutting down the Dublin airport and stranding thousands of us. I didn’t have time for this because Athens was waiting for me the next day. I managed to escape Dublin on one of a handful of flights that left the following day.

So essentially, weather made my time in Ireland miserable. Maybe I will give it another chance someday, but probably not until E~something, that wild Iceland volcano, rests again.

There were a couple of OK things in Dublin. The Museum of Modern Art was nice and restaurants serve hamburgers. And there was a Subway.

The pictures I have here are minimal, but that’s because that’s how I think of this trip. Many of my friends have enjoyed Dublin, so don’t let me stop you. My only suggestion is to not go in the winter because Dubliners don’t know how to deal with snow and ice.

And definitely, don’t let my rave reviews stop you from checking out these pictures. Just click the photo below. 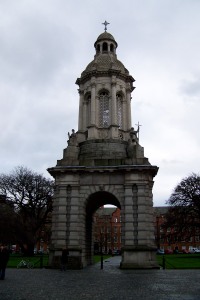 This entry was posted in Europe, Photos, Travel Update and tagged Dublin, Photos. Bookmark the permalink.