I spent the summer of 2008 in New York City, interning in Midtown and living in Brooklyn Heights. Since I was barely getting paid and trying to save as much money for my year abroad as possible, free or reduced-priced activities were my best friend. I tried to plan my weekends and nights about activities that normally had a fee, but at certain times were free, reduced or had a suggested admission. Remember, though, that these times of free or reduced admission often bring long lines and huge crowds. But the smaller museums, on the other hand, are usually no more crowded.

Continue reading to see my top five free (or reduced) activities in the City.

Free concerts abound in Manhattan and its boroughs. I saw Cold War Kids and the Metropolitan Opera for free in Prospect Park in Brooklyn. The New York Philharmonic and Carnegie Hall musicians have free concerts throughout the summer across the city. Bryant Park is a wonderful home to many free activities, from Broadway in Bryant Park on Thursday lunch hours to the Summer Film Fest on Monday evenings.

Broadway in Bryant Park, the cast of "Spring Awakening"

The State Island Ferry gives riders a free view of the Statue of Liberty, the southern tip of Manhattan and western Brooklyn. When my parents visited, we decided that stopping at Ellis Island and Liberty Island weren’t worth the fee (Statue Cruises takes you there), but we did want to see Lady Liberty. If that’s the case for you, too, the Staten Island Ferry is a breezy, picturesque ride without the wait, but there is likely to be a huge line. 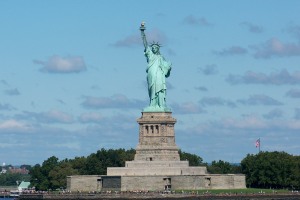 3. Museums with suggested admission/pay what you wish

Museums in N.Y.C. don’t seem to have many student or young adult admission prices, but some of them do have a suggested admission or a “pay what you wish” time. A suggested admission means that if you don’t state otherwise, you’ll pay what the sign says the admission is. This also means  you can pay as little or as much as you want.

That summer, the first time I went to the Metropolitan Museum of Art, I paid the full price because I went to the Cloisters, a branch of the museum dedicated to medieval Europe, and to the main branch of the museum. But the exhibit that I wanted to see (Jeff Koons sculptures on the roof of the building) was closed, so when I returned, I did not pay the full price because that was all I was going to see. 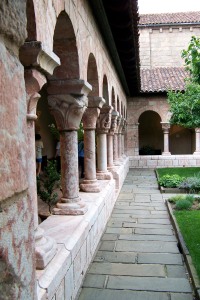 The Cloisters, part of the Metropolitan Museum of Art

A Jeff Koons "Balloon Dog" on the Met's roof

Some other museums that have a suggested admission include

the Museum of the City of New York, the American Museum of Natural History and the Brooklyn Museum. The Frick Collection offers a pay what you wish time on Sundays from 11 a.m. to 1 p.m., as does the Guggenheim on Saturdays from 5:45 p.m. to 7:45 p.m.

Other museums offer a specific day and time when admission is free. The Brooklyn Botanic Garden is free on Tuesdays, Saturdays between 10 a.m. and noon, and winter weekdays. I was one of only a handful of people in the garden the Saturday morning I went, and the gardens were absolutely lovely and quite peaceful.

On the opposite end of the spectrum is the Museum of Modern Art. MOMA is free on Friday nights from 4 p.m. to 8 p.m., and it usually seems like every tourist in N.Y.C. is there with you. But at MOMA, if you branch away from the main galleries, tourists are fewer and farther between. 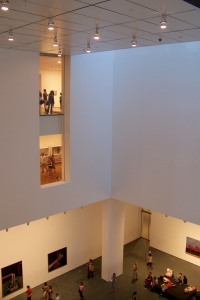 Inside the Museum of Modern Art

My No. 1 on this list is the most costly, but it is what I enjoyed the most and also where I saved the most. My first week there, my office mate told me about the lottery system for Broadway tickets. Every Friday night during my internship, I would rush to a Times Square theater to get my name on a piece of paper for a chance to win a reduced-price ticket to that night’s performance. On my first Friday night, I hurried to “In the Heights,” where there was a guy with slips of paper and a bucket waiting for entries. At 6 p.m., he pulled 14 or so names, mine included. This got me a front-row seat to that evening’s show for a fraction of the cost ($25). After that, I headed to a different show each week, and never went without a show, but I did lose the first time I tried “Avenue Q.” “Wicked” definitely is the most sought-after. Check out this Playbill site to see each show’s policy.

"In the Heights" at Richard Rogers

Another way to get cheap tickets is through the TKTS booths, and if you really want to see a show and don’t want to buy a full-price ticket, this is the way to go. Your chances are significantly higher.

Other ways to find free activities in N.Y.C. include Time Out New York (a calendar list on their site here), FreeNYC, NYC: The Official Guide and Free in NYC.

2 Responses to The Top 5: Free (or reduced) New York City