Berlin is a city that has grown on me over the years. My first visit a few summers ago was interesting but not thrilling. My second visit was an improvement, perhaps because I wanted to give it another chance, and I spent a lot of time in Prenzlauerberg, an up-and-coming neighborhood in East Berlin.

After getting dinner upon my arrival to Berlin on the second time, I headed here, to the Reichstag, to go up into the dome at night. 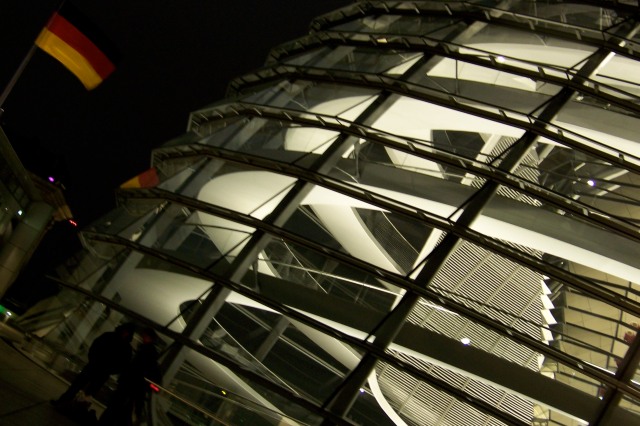 The dome was built in 1999, as an addition to the refurbished building. It has a tower of mirrors in the center and a revolving sun shield to prevent reflections of the sun into the parliament chamber many floors below.

Architecturally, I found the dome fascinating. It’s like the glass pyramid at the Louvre — a combination of old and new. It is open to the elements, though, which made it a bit nippy. You can also walk around outside on the top of the building, which is where I took this shot.

This visit was a good start to my second trip to Berlin. The rest of the trip went well, which made my third trip there  — only six months later, too — quite pleasant, because I was so worried about dreading another week in the German capital.