The agony of buying plane tickets

Posted on December 30, 2010 by elliewick
When it comes to travel planning, arrangements with planes are what I worry about most.

I can easily spend an hour or two agonizing over 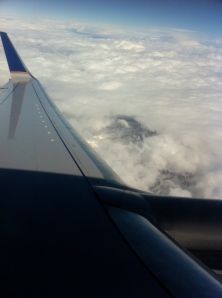 flight times, connection airports and the length of the layover there, and of course, the price.

Toledo, without a doubt, is the closest and has the cheapest parking and the shortest security lines, but flights aren’t always so convenient there. Detroit Metro and Cleveland go back and forth in prices, but parking prices are really different. Parking at the main Delta terminal at Detroit costs $20 a day and parking at the North Terminal is $10 per day, though there is a shuttle available between the two. At Cleveland, parking is $10 per day or $8 per day in the economy lot.

All of these locations give me a variety of choices, but really, they sometimes are a hindrance.

When I search for flights, I use SideStep and have to search Southwest directly.

When I recently searched for a flight to Salt Lake City, lights from Toledo were just too expensive and had terrible connections, so I couldn’t even consider them. Out of the other

flights available, a Frontier flight from Detroit through Denver with a 30 minute layover was the cheapest. I flew through Denver on the way to San Francisco in October, and I was worried about such a short layover there, especially coming from Detroit in the middle of winter trying to get on the last flight to SLC of the day. After checking the airport terminal map, I was able to tell that the Frontier terminal was smaller than the main Continental/United terminal I was in for the October flight and I decided that there would be enough time to get to my connecting flight.

On the return from my West Coast trip I flew through Houston and turned down a flight with a 30 minute layover because I thought the gates would be too far apart from each other. I was able to pick an earlier flight with a longer connection time for the same price to ease my worries, which turned out to be accurate. I timed my hike between gates, and I don’t think there was any possible way I could have made it.

With my SLC plans, none of the other flights to and from SLC gave me the most time there or the best price. The direct flights from Detroit to SLC were much more expensive and the parking with the least hassle for that flight is the expensive McNamara parking. The Southwest flights were the next best in price, but had connections through Chicago, which I wouldn’t mind any time of the year other than winter.

So in the end, I picked that Frontier flight. I’m still not comfortable with the layover time, but it met more of my requirements than any other flights. I was able to get an aisle seat pretty close to the front of the plane, as well, which was the best I could do to console myself.

My worries about connection times come from a few near misses.

In March 2006 I went to Paris for a conference and the group arrived at Charles DeGaulle Airport with plenty of time to make our flight. But then there were all sorts of holdups at the ticket counter, including the staff serving people at the end of the line before the people in the middle. I remember standing there for an hour or so in the que before reaching the counter. By the time we made it, the chaperones had left this group of four students for the flight and boarding time was rapidly approaching. Once we got our tickets, there fortunately was a short security line, but someone from the group had to be searched. Once we all made it through I remember running through the terminal singing “Run, Run Rudolph,” the song the McCallisters run through the airport to in “Home Alone.”

This happened again in Amsterdam this spring when my flight from Munich was late and I had to make it to my flight to the States. I had so looked forward to some shopping time at Schiphol, but that was elusive in my quest to make it to my flight on time. When I realized I had to go through security in the airport because I was leaving the European Union I panicked. I found an airport employee and breathlessly explained my situation and I was escorted to the front of the line.

Flying makes me nervous enough in the first place (after the plane is airborne I can relax) that I don’t need anything else to worry about while in an airplane.

How do you select flights? Have you ever missed a connection?

2 Responses to The agony of buying plane tickets