Neon signs are one of the most recognizable signature trends of Las Vegas. They shine out like beacons into the night, maybe blinking or twinkling with a movable part.

The most famous of these is Betty Willis’ “Welcome to Fabulous Las Vegas Nevada” sign, located at the southern end of the Strip, which she designed while working for Western Neon. The sign is now legally accessible with a parking lot that can be entered from the southbound lanes of Las Vegas Boulevard. 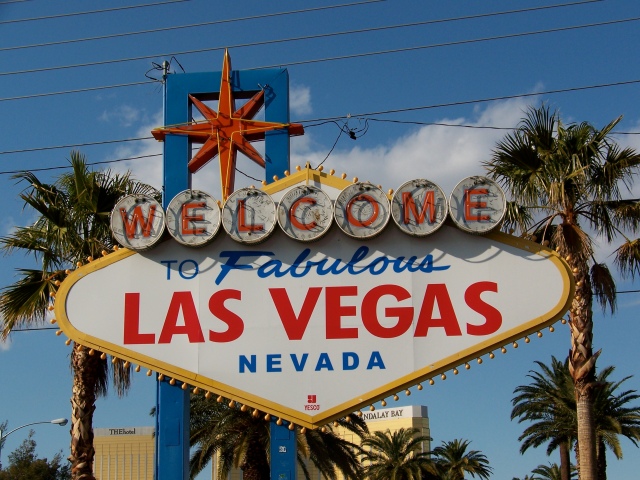 In the course of a casino’s life, signs wear out and need replaced. Many of these signs were created by YESCO, the Young Electric Sign Company. Tom Young originally made a variety of signs, including ones with lights. These advanced into the neon signs of today.

In 1933, YESCO opened an office in the Apache Hotel in Las Vegas. The company later erected the first neon sign in Las Vegas for the Boulder Club.

Flash forward to 1996. The Neon Museum is established to collect and exhibit Las Vegas’ neon signs. Since its creation, the museum has collected over 150 signs, with many of them coming from YESCO donating the contents of its boneyard. This new collection in downtown Las Vegas is known as the Neon Boneyard. The organization wants to refurbish and display all the signs to preserve the history of the neon sign culture of Las Vegas.

When I heard about touring the boneyard, I knew Jon and I would have to visit. It is dilapidated art that is so integral to the image of the casino without the gambling and smoke that was so unappealing to us. And it would make for some wonderful photographs, although photographs from inside the boneyard gates cannot be published, so all photos here of signs from inside and some others that have been repaired are courtesy of the Neon Boneyard and noted as such.

We reserved a tour spot for a Thursday afternoon, and the day was glorious. (Tours are offered twice daily Tuesday through Saturday and must be reserved in advance.)

The boneyard sign honors famous neon signs with  familiar fonts, like the “E” from Caesars, and the stars from the Stardust.

The tour was quite informative, providing tidbits about the signs, casinos and designers. Some of the more interesting pieces included the Yucca sign that showed it was used for a different establishment first, as evidenced by its peeling paint of two different colors. Also in this photo, the “M” sign shown on the right is notably different from many of the early signs in the boneyard. There are rungs around the edge of the sign, and those mean the sign is from post-1975, because that is when OSHA was created and safety features became part of the signs.

Another piece with a good story is the Moulin Rouge sign. Betty Willis designed this piece for the first segregated casino, which stayed open only five months.

The horseshoe and a part of the wall of “Hs” from Binion’s Horseshoe casino are also on view. Benny Binion owned this casino, which was popular because of the high limits on bets. The Horseshoe would honor a bet of any size as long as it was the first one made. Other trademarks here included the first carpet-covered floor, chairs for the gamblers and complimentary drinks. 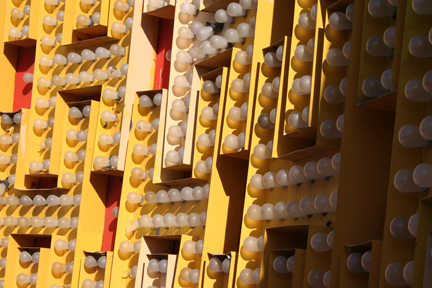 Also in the boneyard is a sign advertising Sassy Sally, a cowgirl sign. Her counterpart is Vegas Vic. When both were refurbished for the Glitter Gulch, an area of Fremont Street, they were married and Sally changed her name to Vicky.

Also in the collection is the Flamingo sign, which was the first casino on Las Vegas Boulevard. Its exotic theme is expressed with an orange and pink flower-like sign above the marquee.

One of the last signs on the 45-minute tour was the Stardust sign. The letters were human sized and the drops of star dust could be seen throughout the area, some in individual pieces and others still conjoined on a pole. The Stardust was built at the time of atomic testing, which influenced the design of the sign with a purple dust cloud. It is the largest sign, standing 188 feet tall with 1,100 bulbs and more than 150 stars.

Refurbished signs, like Vegas Vic and Vicky, can be seen in the Glitter Gulch area of downtown Las Vegas on Fremont Street.