After two-thirds of a day in Las Vegas, Jon and I finally ventured onto the Strip to see some of the hotels. We had spent the early part of the afternoon touring the Neon Boneyard. From there, we headed south on Las Vegas Boulevard.

We passed wedding chapels, the pawn store made famous on TV, motels advertising $26-a-night stays that include color TV and finally approached the Stratosphere, where we would spend a night later in the week. 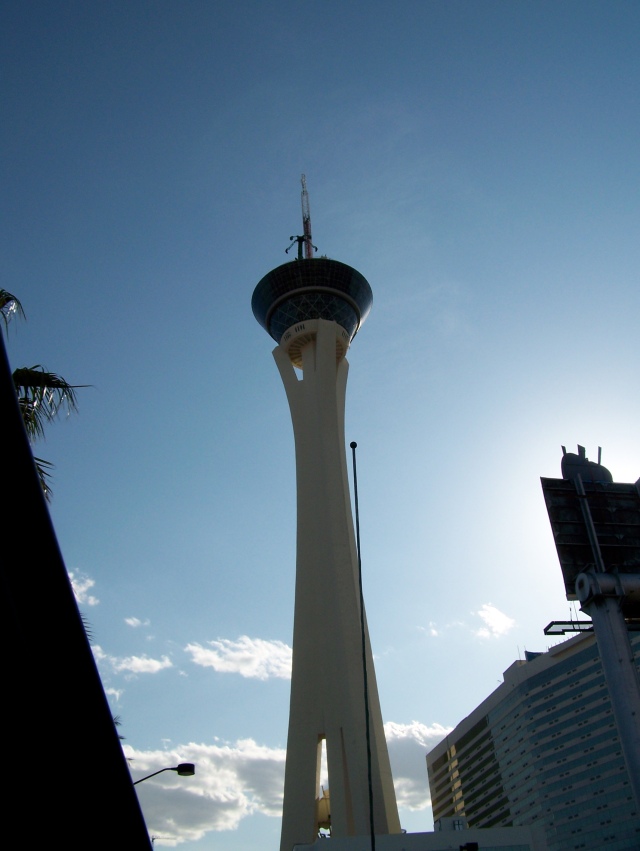 There are empty lots and lots with stalled development like the Fontainebleau property. Now the Sahara is closing in May. Traffic was moving until we got to Treasure Island, where the automobile and pedestrian traffic skyrocketed. We were truly shocked. It was like a huge Times Square with people everywhere, jockeying for a small amount of sidewalk space.

We drove to the end of the Strip, past Mandalay Bay to the “Welcome to Fabulous Las Vegas” sign, where there is now a parking lot for picture-takers. There was an Elvis lookalike who did not look much like Elvis and a just married bride and groom arrived as we were departing. Jon and I took our requisite pictures including one of my traveling gnome Cedric and of Jon’s traveling mate jar.

Next up was walking the southern end of the Strip. We scored a good parking spot in the MGM Grand parking deck and walked to Excalibur. Crossing streets and entering the casinos was quite difficult we quickly learned.

There are plentiful pedestrian bridges, but this requires many trips up and down stairs, just to avoid street crossings, which were few and far between. I didn’t want to see anything inside Excalibur; I was more interested in Luxor because of its Egyptian theme and atypically inclined escalators.

The walking paths at Excalibur ended up leading us inside, which I thought would work because there was a moving walkway between the hotels. This began the maze of casino signs and slot machines and we were quite frustrated by the time we finally made it to Luxor, where signs to the lobby were not to be found. We didn’t see the escalators but we did finally make it outside to see the obelisk and sphinx.

We took the tram back to Excalibur and crossed to New York-New York, where I wanted to walk across the miniature Brooklyn Bridge. The bridge was a disappointment; not only did it not look authentic, it was closed to pedestrians. 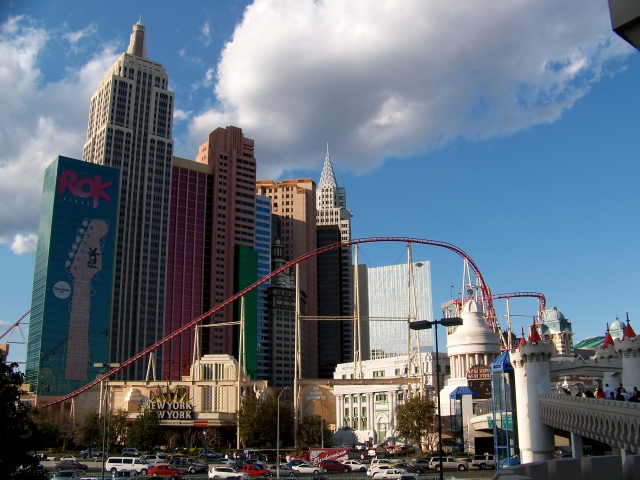 The sidewalks here were the ones covered in advertisements for prostitues from a group of people who tried to hand them to every male who walked past.

Our next stop was the CityCenter complex, home of the Mandarin Oriental, Aria and Vdara hotels and a couple other properties. There are no gawking tourist attractions here, save the theater for the Elvis Cirque du Soleil show. Instead, there is a fine art collection. This was another Budget Travel find (our hotel for the first two nights, the El Cortez Cabana Suites was my first success). The hotels here are definitely not a Budget Travel stay, but if I could ever afford it, I would definitely pick the Aria.

The Aria was the most pleasant casino experience we had. There were no crowds to push through and the artistic details throughout the complex were subtle but still noticeable. It was quiet, which made it a wonderful break from the sounds and throngs of the Strip.

We were here to look at the art, a collection of paintings and sculptures spread throughout the complex inside and out. I had an app on my iPhone serving as a guide and we picked up a map from the Aria concierge. I was excited about a collection of kayaks and canoes tied together called “Big Edge” by Nancy Rubins. 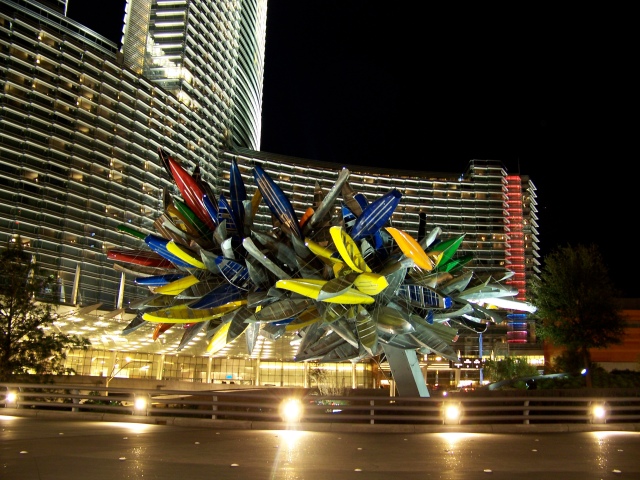 I was also excited about seeing Frank Stella’s “Damascus Gate Variation I” in the Vdara lobby. This painting is part of the Protractor Series, a collection of paintings that feature arcs of varying colors sometimes interlocking that form shapes that look like protractors. His other well-known series is the Irregular Polygons collection, which I will tour next month with Stella himself when it comes to Toledo.

We even found some art that wasn’t part of the tour near the VIVA ELVIS Theater that we really enjoyed. Unfortunately, there wasn’t a name plate, so we don’t know anything about it. A Google search didn’t provide any information, either.

Two other non-tour stops were galleries in the CityCenter complex along Harmon Avenue. One was a gallery of lovely nature photographs, some of places either Jon or I have been and others that we dream of visiting. There was also a plentiful assortment of Aspen trees in these photographs, and I look forward to seeing large groves of them in bloom. The other gallery was, to my delight, a Dale Chihuly gallery with a grand assortment of hand-blown glass and books.

We leisurly looked through the art to our heart’s content until nightfall, when we headed back to Las Vegas Boulevard for one final stop — the foutains at Bellagio.

We approached just as a show was beginning, and it happened to be to Lee Greenwood’s “God Bless the USA.” The fountains were lovely, but the music wasn’t what I wanted my fountain experience to be, so we waited 15 minutes for a second show. And this time, the fountains danced to the music of the Count Basie Orchestra with Frank Sinatra singing “Fly Me to the Moon,” and that was perfect.