Visiting the Valley of Fire

After visiting the Hoover Dam for free, Jon and I were excited to head out to Valley of Fire State Park, northeast of Las Vegas between Interstate 15 and Lake Mead.

We took the scenic route to get there, with a drive along the western shore of Lake Mead complete with desert landscapes, the bright blue water of the lake and mountains of all sizes.

This route requires paying to the enter the national recreation area, which wasn’t mentioned in my Lonely Planet Las Vegas and therefore caught me off guard, but Jon has a national park pass, so we entered for free. This drive was much more pleasant than the other option: driving back to Las Vegas and then along I-15, all of which would have been traffic filled.

We arrived at the east entrance, which has a pay station. Unlike Ohio, most other states’ state parks have entrance fees. Rather than man a booth, there are stations with envelopes to enclose your cash or check, which we learned about when camping in California and also at the state parks along Oregon’s coast. There is a day-use fee and an additional fee if you plan on spending the night.

The east entrance is at the Elephant Rock viewpoint, where an arch is shaped like an elephant. We hiked up above the arch to admire the view.

By this time, the sun was beginning its descent, and sunset comes a lot faster when there are mountains on the horizon, so we climbed down and drove out to the campgrounds behind Arch Rock and searched for a spot.

The next morning we stopped to see the petroglyphs at Atlatl Rock (at’-lat-l). 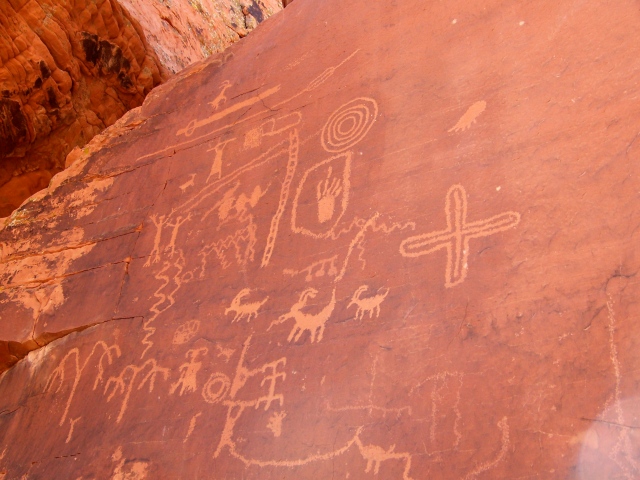 Atlatl Rock: the atlatl was the predecessor to the bow and arrow and was a notched stick used to throw primitive spears.

Then after stopping at the visitor’s center to use a flush toilet and sink (such occasional comforts when camping!), we headed out to the White Domes area at the northern end of the park. There’s been many a movie, TV show and commercial shot here, and the remains from one movie set can still be seen along the trail. The most notable shooting here was Star Trek.

The sand trail starts at the edge of the parking lot, and I sat here people watching after our hike while Jon went off to climb more rocks. 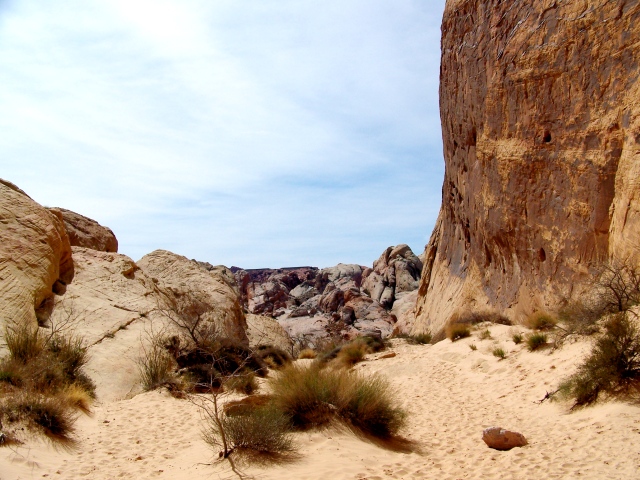 Some people drove here and took pictures from their car with the windows rolled down. Others walked a few feet on the sand and exclaimed that that was just too much work for them. Another couple started the hike and then were back in 10 minutes after they had seen enough.

Really, it wasn’t that hard. There were only a couple of spots where the trail descended over rocks. The rest is level. The first portion is loose sand and the rest is packed soil. There’s also a short “narrow” portion where the walls encroach close on both sides, so if you don’t like small spaces, this might not be for you.

If you don’t go on the hike, this is what else you would miss:

Looking south from the top of one of the white domes 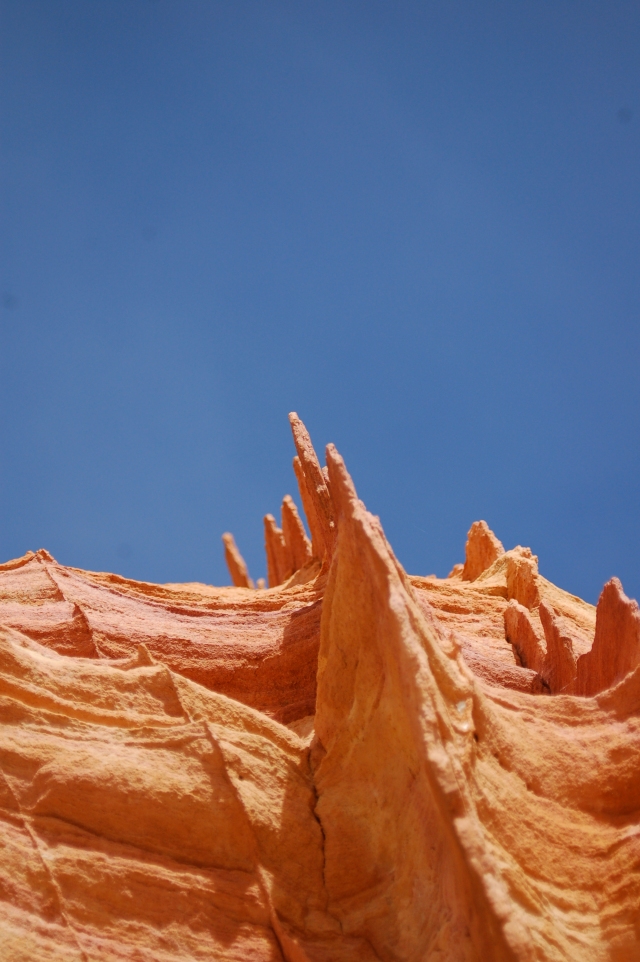 Really cool flutes on a rock, by Jon 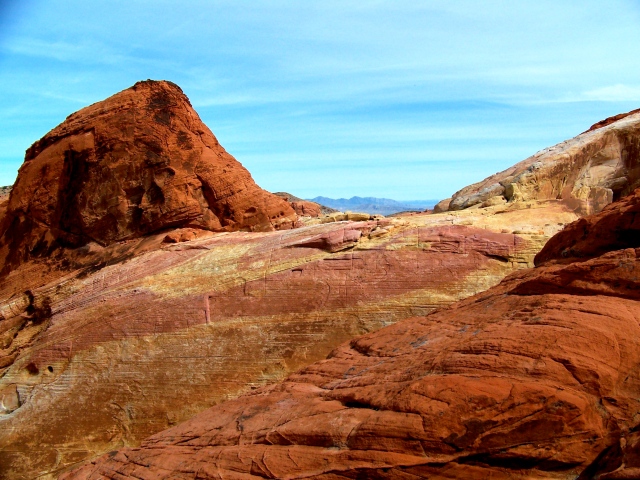 We thought this rock, viewed from atop a white dome, looked like a submarine

Another southerly view from atop another white dome, by Jon

Our next stop was Fire Canyon/Silica Dome. 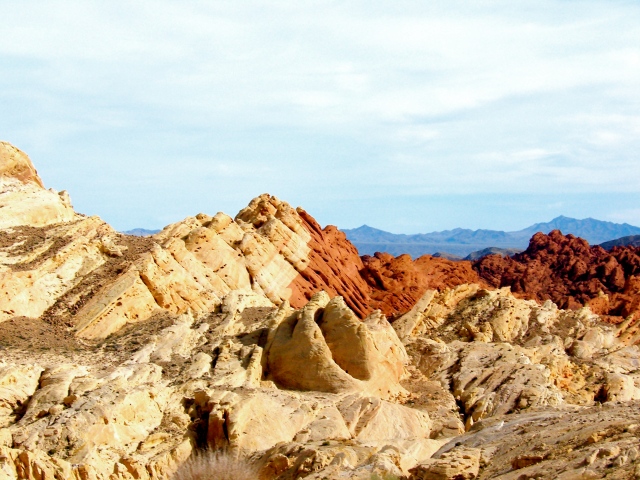 Now, I don’t blame you if you look at this and don’t want to descend. I didn’t want to, but Jon wasn’t having that. Descents scare me when they involve scrambling over lots of rocks. A descending path is fine, as are stairs, which is how I managed to climb down the Untersberg, the mountain in Salzburg. But descending rocks is a whole different story. 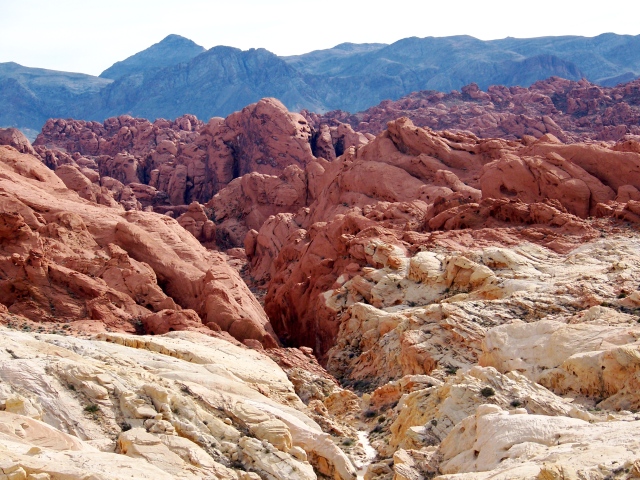 I will admit the sandstone was really cool, especially at the point where the Silica Dome turns into Fire Canyon. This is where the Manila-folder colored sandstone turns red. 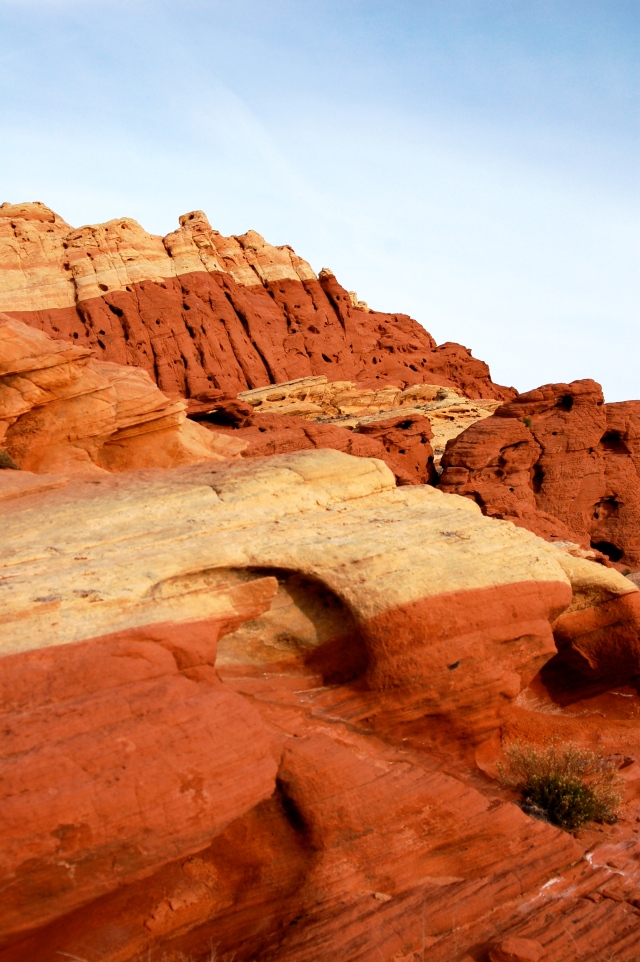 Where the Silica Dome meets Fire Canyon, by Jon

We were following a stream bed to the bottom, so a few places were damp but the walking was done on easily navigable sand.

In the Silica Dome, with the red of Fire Canyon ahead

On the way out of the park, we stopped at the Rainbow Vista viewpoint, but what I thought was the viewpoint wasn’t. What we did see was a landscape of beautiful colors and was definitely rainbow-enough for me. 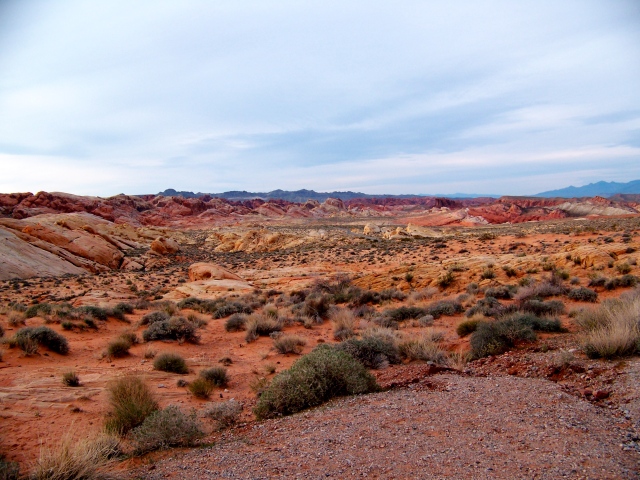 From Valley of Fire we headed out the west entrance to I-15 and Vegas on our way to Red Rock Canyon National Conservation Area.

3 Responses to Visiting the Valley of Fire