Let the dancing begin! It is time for Umhlanga

The integration activity of the year for young females is here. One year ago my babe said I should dance at Umhlanga with my sisi this year.

One of the best coordinated groups of girls in 2016. They are bowing to the king.

There was a community meeting with the caregivers of the participants that centered mostly around me, and how I would be participating. There are a few things that could get me fired, and I am not interested in having my act of ultimate integration force me to lose my job. Babe did his best to explain the rules and how I would participate. I was aiming for maybe a 75 percent level of participation, by not camping out every night and by not going to three of the eight days.

The princesses wear the red feathers. They are the first group to perform.

I will be attending the first two days, which I had not planned on, because I am their sister and they want me to be there. I think I can check off integrated now after two practices.

Let’s just say that those 15 hours of practice with my siSwati tutor paid off. I think I am singing lead on a few songs and dancing in the front row of my group, when I thought I would be hiding in the back, barely hanging on.

I think, though, that the group has realized that everyone, and I mean everyone, will be watching us because of me, and we might as well play it up and put on a good show.

But let’s backtrack a bit about Umhlanga. The word umhlanga means reed(s). In reference to the traditional event, it means the Reed Dance. 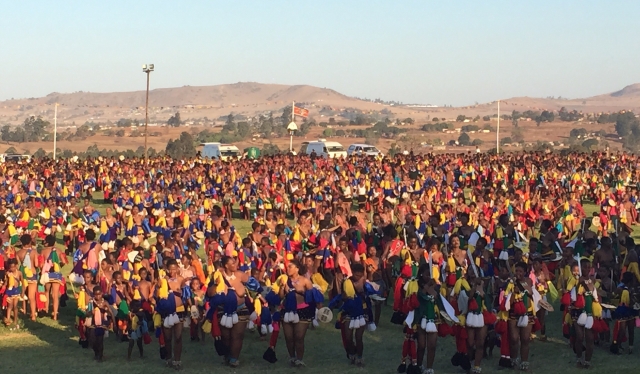 All the chiefdoms dance together after the procession is complete.

This event is for the timbali (flowers, specifically roses, but in this instance, maidens) of Swaziland. Only childless, unmarried females are allowed to participate. Each chiefdom sends a group of girls, sometimes split into two age groups, where the older girls march farther than the younger girls.

My chiefdom’s experience is a little bit different because we host the group of younger girls. Preparations are in full swing, with new latrines built, dozens of portable toilets set up, extra jojo tanks of water delivered, and tents erected for the girls to sleep under. So rather than go to the older girls location, we sleep in our chiefdom, but still “camping” rather than at home.

On day one, which is always a Tuesday, participants get bussed to the royal village of the Indlovukazi (big elephant, or queen mother). This is in Ludzidzini. Participants will be officially registered so that they can be kept track of. Elders from the chiefdom will supervise each group.

On day two, the older group marches to eNkabezweni, near Lozitha, which I will be doing. The younger girls will be going to Luyengo. My group will then be bussed to Luyengo. This should be a two-hour march, and we will be in marching outfits from this point on.

On day three, both groups cut reeds. We will be cutting reeds at UNISWA Luyengo. This year, all participants have been requested to cut at least 15 reeds (up from seven). The number cut must always be odd.

On day four, participants return to Ludzidzini carrying their bundles of reeds, supposedly arriving at night. This will be a 30 km march.

On day six, participants deliver their reeds to the queen mother’s boma. There is a special song sung when delivering the reeds. Then there is dancing at the arena.

On day seven, a procession of the chiefdoms begins once the king has arrived. All of the timbali will dance in front of the king, and then he will come into the audience to greet a number of participants. He will be followed by his retinue and hordes of cameras. The whole time the girls will be singing and dancing. After each group passes in front of the king, they will form an arch across the field to continue their songs and dance. The princesses will be in the center and sing songs via microphone for the whole group to dance in unison.

On day eight, the king will command that a number of cattle are slaughtered and each participant will take a piece of meat home.

One of my friends here will be documenting three of the days for me. Swazi TV and the Swazi Times, I am quite sure, will be documenting all of my activities. I thought I might be able to stay a secret by not going to the group registration, but that is not the case.

I cannot tell you much else about the upcoming week, other than that I am incredibly excited. I just hope that I can sing and dance well when I am the subject of much attention.

4 Responses to Let the dancing begin! It is time for Umhlanga