Posted on September 4, 2017 by elliewick

Cutting reeds was definitely a day for the memory books.

It started with many hours of waiting, which has become a common theme. Then the group of timbali that has most adopted me disappeared after getting ready. I had realized the day before that this members of this group really like to do their own thing.

I headed down from the school with the rest of the group and we were waiting for the parade that started at the umphakatsi to get to us, so we could join the line. The group led by the princesses finally arrived, and unsurprisingly, the group that left was at the end of this segment of the line. They called me over and I hurried to join.

We turned onto UNISWA’s Luyengo campus and walked to a swamp in the back where the umhlanga, or reeds grow.

The princesses had a ceremonial first cutting of the reeds, and then it was a free-for-all.

Like so many other parts of this event, I received no real instructions. All I knew was that I needed 15 reeds. 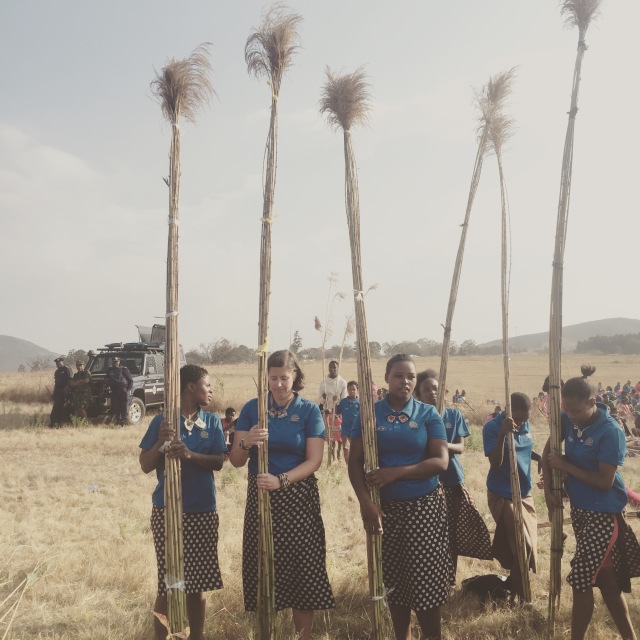 For any future participants, if you are going to be cutting reeds alone, bring a knife. Breaking them by hand was a lot of work. The leaves are also quite sharp. I had a huge gash on my pinky finger. More importantly, you also need to cut only reeds that have tassles on top. And your reed collection needs to have an odd number.

Fortunately, something I didn’t know about was happening. One of the tindvuna, the guards, was with one member of my group and they cut about 100 reeds and brought them out of the swamp to distribute to us. This was a relief because I had only four properly tassled reeds. This, apparently, is how reed cutting is supposed to happen. Maidens should work with the tindvuna to cut reeds with a bush knife. 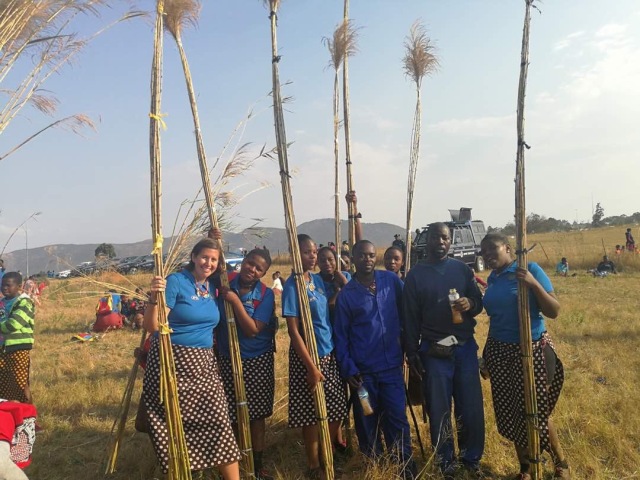 After many rounds of photos, we lined up to match back up to Luyengo. We sang and danced up the hill with our 15-foot reeds.

When we arrived at the campus entrance, we had to wait for the police to clear the road. This led to more dancing. Eventually the timbali from my group convinced me to dance ingadla, the kicking dance, in front of everyone. Once wasn’t enough, either. The woman in charge of the day’s activities saw me dance and told me to dance again for the princesses.

It was at this point that I started to feel a bit like a party trick. I think my group wants to show me off, but it is awkward at times. Regardless, it was still an awesome day.

Here are links to all my Umhlanga posts:

Let the dancing begin! It is time for Umhlanga

Day one: Registration at Umhlanga

Day two: The first day of marching at Umhlanga

Delivering the reeds in photos