I thought to myself, “I wonder if the king is here,” and then I looked up and made eye contact with him.

It was the day of reed delivery to the queen mother, and it only made sense that the royal family would be watching.

After a well-deserved day of rest, I had returned to Lobamba High School to get ready to deliver my reeds to the queen mother and dance on the main field.

This was the extent of my knowledge for the day. One of the hardest parts of participating in Umhlanga was giving up all control. I really like to know what is happening next so that I can be prepared, and although I always had what I needed, it was hard to be at the mercy of people who only sometimes communicated well in English.

Around noon we lined up outside our tent after collecting our bundles of reeds. Our tindvuna (male chaperones) put us in lines of five, with me easily visible in the second line. 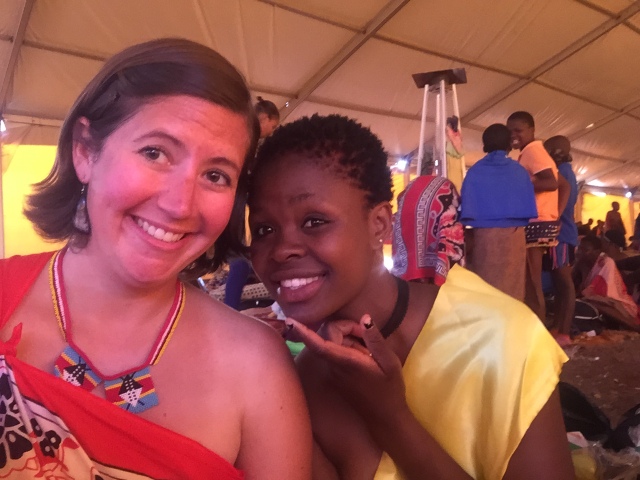 Noncedo and me getting ready.

We finally headed toward Ludzidzini singing one of my new favorite songs.

We joined those who departed before us waiting to take the reeds to the kraal in a sea of beautifully dressed Swazi and Zulu maidens. Unlike the previous days, though, there were tourists looking for good photos.

In Swaziland, it is illegal to take photos of children without their parents’ consent, but that did not stop anyone. Although I don’t fall under the legislation, I still was extremely annoyed at the people who wanted to take photos of me without asking.

Apparently everyone thought it would be great to have a picture of the white girl standing around traditionally dressed with her fellow timbali. I educated the rest of my group that they did not have to pose for anyone and could turn around just like me. Had any of these 20-plus people who walked past toting huge cameras asked to take a photo of me with or without my friends, I would have agreed, but no one did. 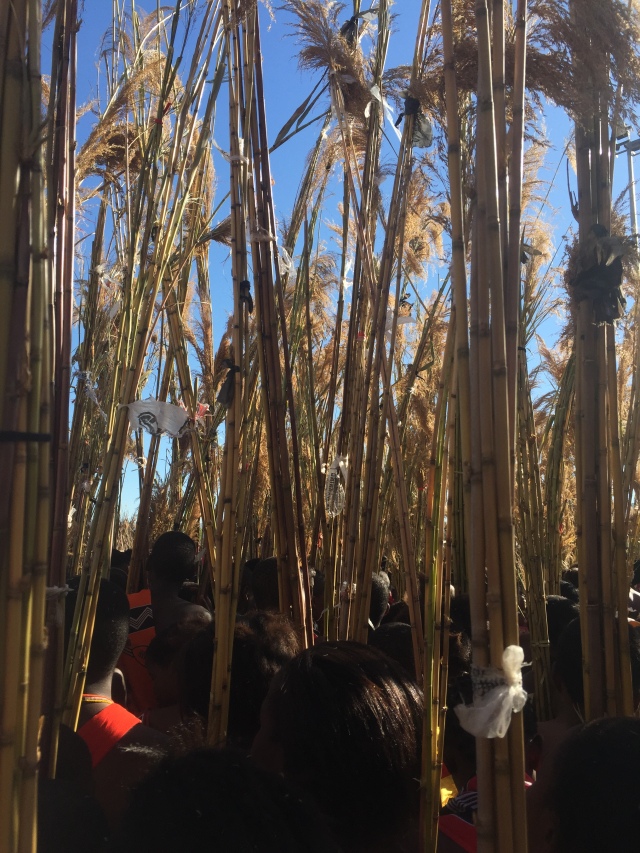 Waiting with our reeds.

Finally we were off and we slowly made our way to the kraal where we handed over our bunches of reeds to tindvuna who lined them up on fences erected for the occasion. They were surprised to see me. Then a lutsango member (regiment for married women) called out to me, asking if I was the Peace Corps Volunteer. Apparently she had been keeping up on her Swazi Times articles, where there was a photo and an article about me on two different days.

Then things got a bit crazy. We started singing one of this year’s new songs while reforming into our lines. I realized there were people ahead, which I was not prepared for. I thought to myself, “I wonder if the king is here,” and then I looked up and made eye contact with him.

I had a moment of panic. Can I go to jail for this? Will the king marry me for this? But I did not have time to be distracted, because oh, there’s the queen mother. And oh, there’s a lot of important-looking men. And I still had to keep singing and dancing and trying to stay in step.

We get past all of them, and my group asks me to sing, and of course I say yes. They know I know the songs, and if I have already embarrassed myself in front of the king, what else is there to lose?

I lead the singing as we make our way down to the field. I surprise everyone by taking my shoes off when we get to the grass. We sing and dance our way across the back of the field where all of the participants have massed. Then we form our own group singing all manner of songs. They make me dance ingadla, the kicking dance, and sing lead a few times, and soon we have a mass of girls surrounding us, watching the group with the imbali of a different skin color try so hard to be Swazi.

Eventually we parade in front of the stands in a horrible formation and file around to the back of the field again where we have our own dance party for the rest of the night.

During moments like these I would hear lots of shouts of umlungu, the word for visitor and regularly used for all white people. Sometimes I ignore this word, and sometimes I don’t. At Umhlanga, I would answer but not in the way expected. Most of the time, I think Swazis do not expect foreigners to even recognize the word, let alone be able to respond in siSwati. So when I would say, “Uphi?” they would be shocked. I was responding with the word where, which I would follow with, “Ngingu Hloniphile.” I am Hloniphile. “Ngihlala kaNgwane.” I live in Swaziland.

After hearing my response a few times, the girls in my group would respond likewise. It was their way of saying she’s with us and you can acknowledge her properly, which was more than I ever expected.

3 Responses to Day six: Delivering reeds to the queen mother