In the two months that have passed since the end of Umhlanga, I have met so many astonished and proud Swazis and Zulus. People are still telling me that they saw me dancing and everyone is impressed.

Some ask me to sing and/or dance for them. I sing “Gwalagwala” for them, followed by “Mine ngilitjitji paca” (I am a pure maiden), which gets a rise out of everyone.

My favorite story is from the Johannesburg airport. I was eating a meal, and I greeted the staff at the restaurant in siSwati. All of the waiters took a detour to my table for a small conversation. One of them asked me if I participated in that “dancing event.” I responded in siSwati, saying I had danced at Umhlanga. He still did not believe me and asked for photos. When I showed him, he was so impressed. 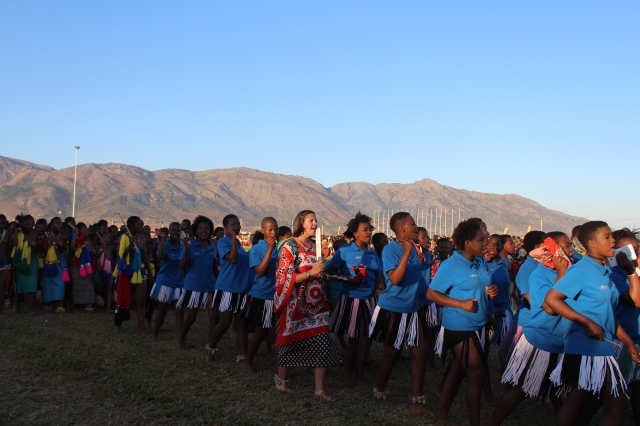 Dancing on the field for the king.

I am happy that my community and fellow participants will remember me in a positive light, especially when I feel like I have accomplished so little here.

Since the end of Umhlanga, my tutor and I have been practicing other traditional songs, particularly for weddings. Weddings have many parts in Swaziland, and they rotate between the bride’s homestead and the groom’s. There may also be a modern wedding celebration, called a white wedding because of the bride’s dress.

I attended the final stage of a wedding just before Umhlanga. One of my make’s elder sister’s dowery was finally paid by the groom’s family, which meant the umtsimba could finally occur.

I was worried this would be my only wedding and I would not be able to sing along with all the new songs I know, but it turns out my bhuti came home this past week because he has chosen a second wife and he needed to tell make. The fiancee came to visit yesterday. She looked terrified. I don’t know if it was because no one told her about me or if she really is totally terrified.

After she was introduced as my sikoni (sister-in-law), make asked if I was ready to lead her to the kraal on the day of her teka. Apparently I will be taking over as the eldest female child on the homestead.

The first step to getting married is to have a sleepover (called kujuma) at the male’s homestead so his family can decide if the fiancee is acceptable. The second step is to continue having sleepovers so that the fiancee can be teka-ed.

This week I will write about the teka, lobola, and umtsimba, the three main stages of a traditional wedding. I look forward to actively participating in this wedding and sharing it with you.