I do not recall how my money collection initially started, but for 15 years or so, it has been fun adding to the collection. One of my uncles is a regular contributor with money from his own travels. I am only starting to approach the number of his contributions to the collection.

At first, there was a lot of sorting and research to do. Then I studied abroad in Austria and added 10 or so currencies to the collection. The change to the euro has greatly standardized currencies, but each country is still able to make the designs on the coins, so there is still some individuality. During my year studying abroad I also made a trip to Slovenia in part for its currency because it was changing to the Euro the next year. To read more about my collection, check out these posts: Collecting foreign money and Slovakia, the euro and collecting currency.

I noted in “Collecting foreign money” that my currency collection was severely lacking African currencies. How convenient for my collection that I now live in Swaziland! Except that scanning bills and coins made for such beautiful photos, and my current one-room abode doesn’t have that luxury, so I hope the pictures suffice.

I traveled to Mozambique in April 2017. It was beautiful. I wasn’t harassed on the street and the food had variety and was cheap. I would go back, but a visa is expensive on the Peace Corps budget and distances within the country are far. Mozambican Portuguese sounded like French and sometimes looked like Spanish. It was entertaining trying to speak it.

On the 20 meticais (met-ih-cash) note is the country’s first president, Samora Moises Machel. He died in a plane crash in South Africa near the Swaziland and Mozambique borders, and his wife later married Nelson Mandela. The back of the 20 meticais note is a black rhino. The coins have a marimba (native to Mozambique!), an office building, a female student, and a fish. 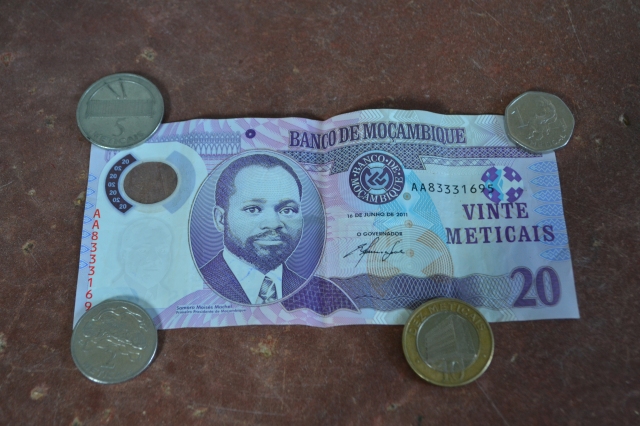 Namibia’s dollar is based off South Africa’s rand, just like the money in Swaziland and Lesotho. This N$10 note has Dr. Sam Nujoma, Namibia’s first president, on the front side, and these springbok on the reverse. I particularly liked the silver coins with trees, including the quiver tree and aloe. There is a bird of prey on the bronze coin.

Botswana’s currency is called the pula, which means rain. This 10 pula note shows Botswana’s current president, Ian Khama. The crest in the upper right corner includes Botswana’s national animal, the zebra. The zebra was chosen because the country’s first president married a white woman, and the zebra has both black and white stripes. There’s also an oryx, a type of antelope, shown, with spiral patterns that represent traditional weaving. The coins show a black rhino, an African fish eagle, an oryx, and a red-billed hornbill.

South Africa’s currency, the rand, has been updated since this 100 rand note was printed, but I like this version better. The current 100 rand note is blue and white with Nelson Mandela on one side and a buffalo on the other. The buffalo did not change from this note with zebras. The coins show a kudu and two different flowers. Rand notes are legal tender in Swaziland, but not the coins.

The currency in Lesotho is the Loti (maloti when plural). This side shows the style of traditional Lesotho homes. The other side shows former and present kings.

All of the rupee notes in Mauritius show the dodo bird, which lived on the island before becoming extinct. There’s an outline of the island on the Rs25 note. The coins all have the first Mauritian president, Sir Seewoosaguar Ramgoolam. The other sides show sugar cane, the country’s shield, and a deer.

And finally, the Zambian kwacha. I first traveled to Zambia in May 2017, and I returned to visit Victoria Falls in January 2018. I regret returning with this much money because it’s a whopping $18. The currency has many scenes, including an indigenous man breaking the chain of colonization and the African fish eagle. Also shown are former leaders, the buffalo, the baobab tree, and the black lechwe antelope. 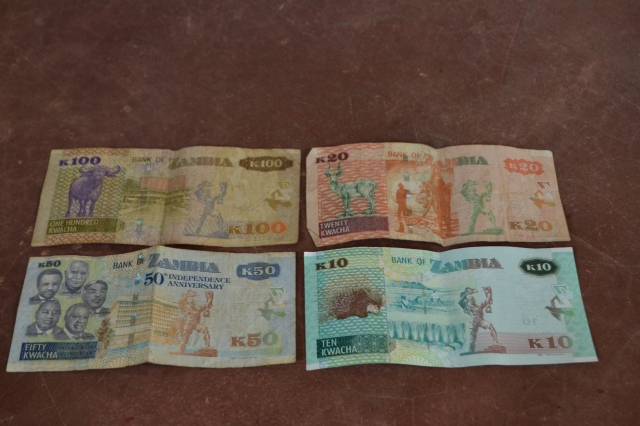 A close-up of the K10 note with a porcupine and rice fields. 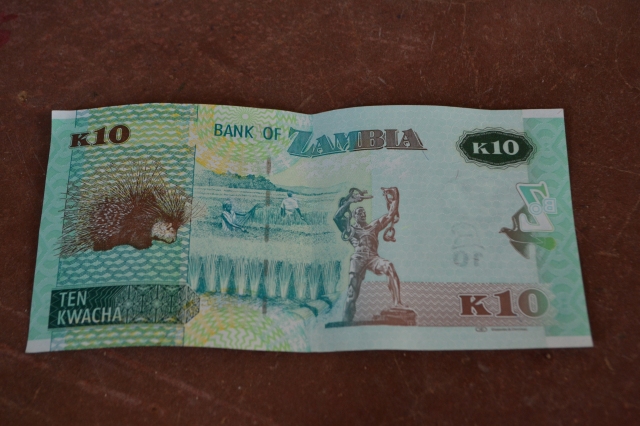