An ode to my favorite ice creams

The month of July has always been my favorite month for eating ice cream, most likely because it is the month where I get to have my favorite ice cream creation.

This is very near and dear to me right now because my month-long ice cream binge has come to an end, and it also could be the last time I have a month like this again, especially at the locations I will mention here.

What makes July special is that I spend the weekends during the month at a house on the beach in Huron. And so, it is here where ice cream becomes a necessary ritual.

My first ice cream of the month has to be at the Pied Piper on Cleveland Road. 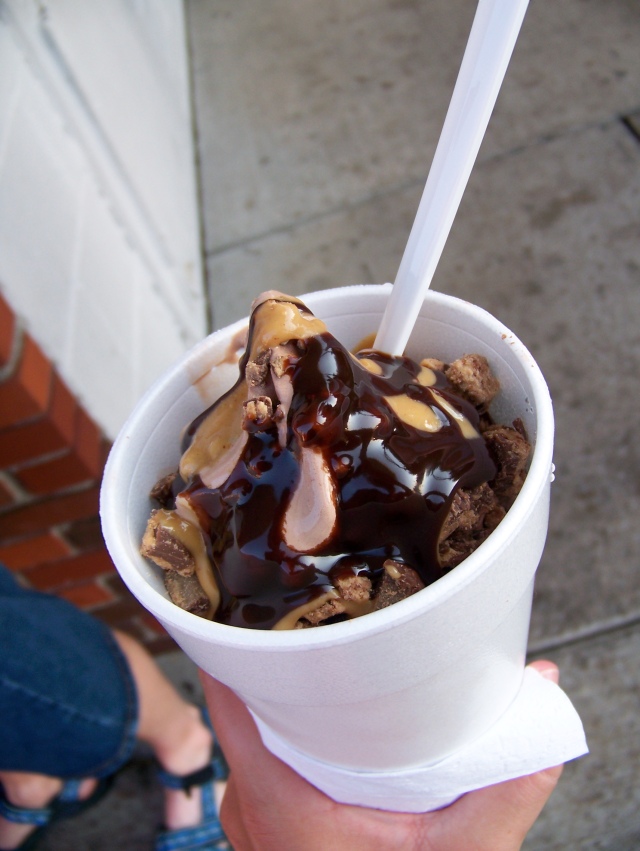 My family also enjoys this location immensely for other creations as well, like the Turtle Sundae and ice cream served with freshly made raspberry sauce. I also think the flurry with mint chocolate chips is pretty delicious and my grandfather always chooses the orange sherbet.

The second trip for ice cream is likely to be the Dairy Dock in Vermilion, which is where my brother particularly likes the flurry with peanut butter and Oreos.

Also on the list is a cone from Granny Joe’s, which used to be Edna Mae’s, in Vermilion. This ice cream parlor serves Toft’s ice cream, and I had a cone with Bullpen Chocolate, which recently replaced Cave Man Chocolate. The Bullpen Chocolate flavor was fantastic. It was a dark chocolate with Oreo cookie pieces.

Also this year, I made it out to the Toft’s factory in Sandusky. I had had the cone from Granny Joe’s the night before, and had eaten a massive and wonderful cone full of Herd of Cows at the Toft’s Ice Cream Parlor at Cedar Point the week before.

The Toft’s factory isn’t a common stop for my family because my brother was once thoroughly disappointed in his ice cream selection there as a child and has refused to return. Since then, I have had a few treats from their parlor in Port Clinton after a stop at Cheese Haven, the Marblehead lighthouse or to one of the ferries to head out to the Lake Erie islands.

And then, I discovered that at the factory you can get the same giant cone for half the price! And there are easily 30 flavors to choose from. If there is an ice cream heaven, I think it would pretty much be like Toft’s.

I selected one flavor only (you can choose two per cone): Red Velvet Cake. This was my second choice the evening before. It definitely topped the Bullpen Chocolate and rivaled my all-time favorite of mint chocolate chip.

In the midst of all these vacation ice cream cones, I also had another well-priced waffle cone ($2.30) at Dietsch Brothers in Findlay. 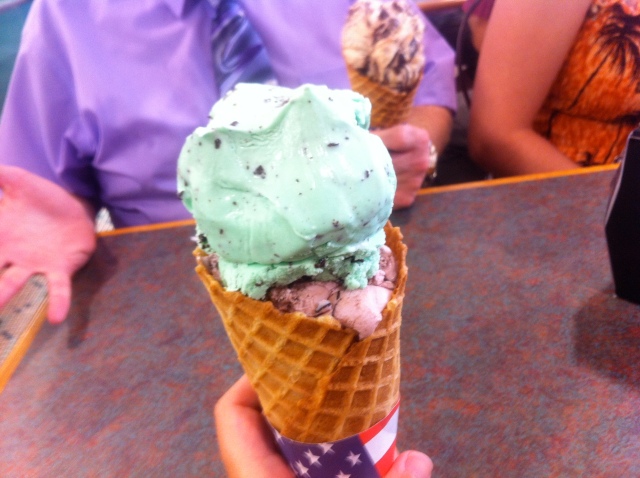 I tried black raspberry chocolate chunk, and I thought there wasn’t enough raspberry flavor, but the coloring was definitely pretty. Their mint chocolate chip is quite good, as is their flavor with buckeyes. I have also had their rum raisin, which was a bit too rummy.

I was invited to Dietsch’s again just as I was beginning this post and I had chocolate peanut butter, which has ripples of real peanut butter in it, and was quite good. This was the best cone yet from Dietsch Brothers.

In addition to the ice cream establishments I have mentioned so far, I need to share a few other places across the globe.

First up is Myles’ Dairy Queen in Bowling Green, Ohio. There can be no better Dairy Queen than this one, hands down, mostly because for the same price as any other Dairy Queen, you get nearly twice as much ice cream.

Katie’s Korner is another favorite, with locations in Howland and Niles in Ohio, along with many others I haven’t been to. The mint chocolate chip has always been good and they serve a pretty fantastic dark chocolate peanut butter as well. A flavor unique to them, as far as I know, is Salty Dog, which has pretzels in the ice cream.

My trip to Kalamazoo earlier this year also included an evening of ice cream. My friend Caitlin and I headed up to Plainwell to the Plainwell Ice Cream Co., which I had read about online and decided was a necessary stop on my trip. The tiny business was packed, which is always a good sign. I had mint chocolate chip, what I usually have on a first stop, and it was delicious and inexpensive, I think under $3 for a waffle cone. The Plainwell Ice Cream Co. is located at 621 East Bridge St., Plainwell, Mich.

In Salzburg, Austria, I can’t say that I had any particularly noteworthy ice cream, but there is a noteworthy name. One of the many gelato stands is called Eis Zeit, which means “ice cream time.” There is no better name than that.

The best ice cream I had in Europe came from Venice, from an establishment recommended by Rick Steves, and he says it is considered the best gelateria in Venice. I was quite impressed with La Boutique del Gelato at 5727 Salizada San Lio, where I was served a generous amount of Nutella gelato. Unfortunately, I didn’t realize at the time my camera was out of focus. 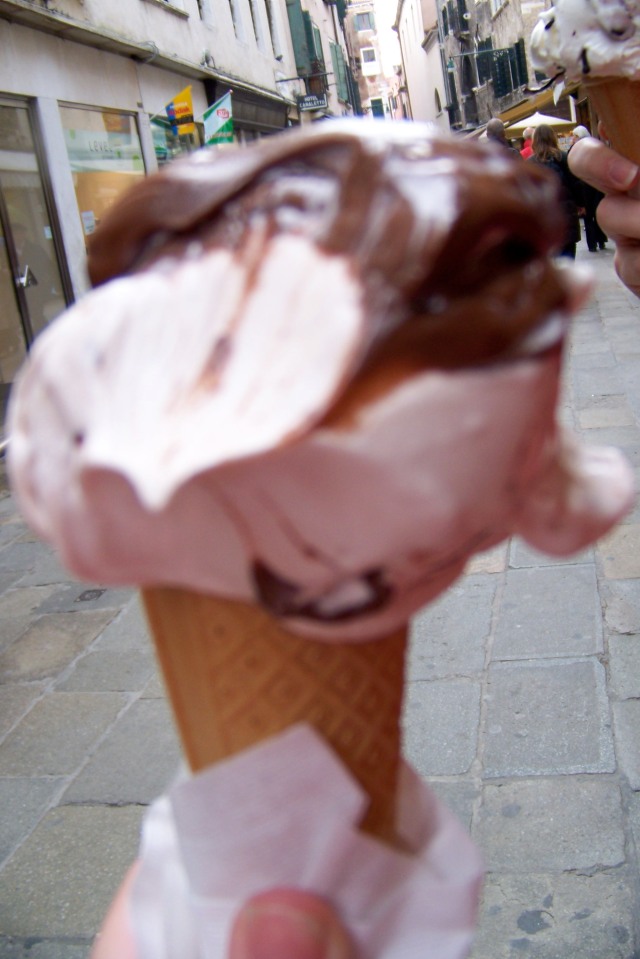 So yes, I love ice cream, and I am always looking for new ice cream to try. If you have a suggestion, please let me know.

4 Responses to An ode to my favorite ice creams