The top 5 German (and Austrian) things to do in Frankenmuth, Mich.

At the beginning of January, I headed up north to Frankenmuth, Mich., to see if its claim as “Michigan’s Little Bavaria” could satisfy the needs of someone who’d spent an ample amount of time in the real Bavaria.

Frankenmuth succeeded in taking my mind back to Austria. The sausage was delicious, the beer schmeckt (tasted good) and the architectural style of the buildings (visible timber, murals and a Glockenspiel) really made me feel like I was in a little Bavaria.

Here are my Top 5 German (and Austrian) things to do in Frankenmuth:

The Frankenmuth Cheese Haus didn’t have that much German-style cheese, but it did have lots of German beer. Hefeweißen — or wheat beer — was available in many varieties, including Hacker-Pschorr and Hofbräuhaus, two of the Munich city beers. Pilsner-style beer was also available here.

The story says that when the Germans migrated to Michigan to create a town they called Frankenmuth, some gnomes came along for the journey in the year 1845. They dug homes into the riverbank and lived there undiscovered until 2006. When they were discovered, they were taken to the Historical Museum, and later, with the help of the Chamber of Commerce, were found new homes in businesses in Frankenmuth. Now, with the Chamber of Commerce’s Gnome Guide, visitors can hunt for the gnomes and win prizes. 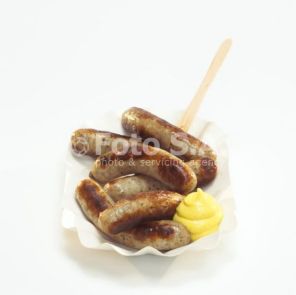 Sausage and Schnitzel are the two foods I miss the most. These stores are a sausage-lover’s heaven. Most sausage is too scary for me t

o try (think Blutwurst), but I dearly enjoyed Nürnberger Rostbratwurst  and Käsekrainer , and I was able to find both, in addition to more German beer.

After visiting Salzburg and Oberdorf, both in Austria, in 1976, Wally Bronner, the owner of Bronner’s Christmas Wonderland, the world’s largest Christmas store, decided he’d like to have a copy of the Silent Night Memorial Chapel at his store. The chapel was constructed in Frankenmuth in 1992. The chapel in Austria is where “Silent Night,” an original, Austrian hymn called “Stille Nacht,” was first performed. Officials from Oberndorf gave Bronner copies of “Stille Nacht” in 30 languages in 1990. By 1999, Bronner had collected versions of the song in over 300 languages, which he presented to Oberndorf. The octagonal building in Frankenmuth is the same shape and size as the original and is decorated in an Austrian fashion.

1. The Bavarian Inn and Lodge

With German restaurants, decorations, a tower with an onion dome, a  Glockenspiel and a half-timbered building, the Bavarian Inn and its Lodge definitely are the most German of all of Frankenmuth’s activities. The Inn’s restaurant has menu items of ethnic-German style, like Kohl und Schinken Knödel (cabbage and ham 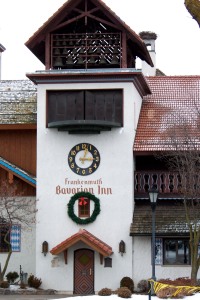 The other neat thing about the Bavarian Inn and its Lodge, is that they have an authentic pretzel-making class and a Ratskeller restaurant in the Lodge that is decorated with German signs.

This entry was posted in Top 5, U.S. and tagged Austria, Germany, Michigan, Top 5. Bookmark the permalink.

2 Responses to The top 5 German (and Austrian) things to do in Frankenmuth, Mich.